Be safe etc. etc. Dont OVER jack when relieving pressure. Double check my bolt mm, Im certain all the frame bolts are 14mm, I forget if the through bolts are uniformly 17mm.

Transmission mount - Can preform through the engine bay. IIRC its 14mm all the way around. Through bolt could be 17mm but I swear they were all 14.

First "relieve" some pressure off the mount, this can be done by gently jacking the transmission up SLIGHTLY. You can place a cloth as to not damage the bell housing. You will want to aim directly beneath the mount and its OK if its not flush as you will only supporting the transmission slightly. Give it a few jacks until you see the transmission / engine shift slightly upwards. You will know you have relieved pressure as the through bolt (arrowed in red) will slide right out. Do not over jack! Use your judgement!

*Also careful, the axle boot is also under the transmission mount, you dont want to jack that. 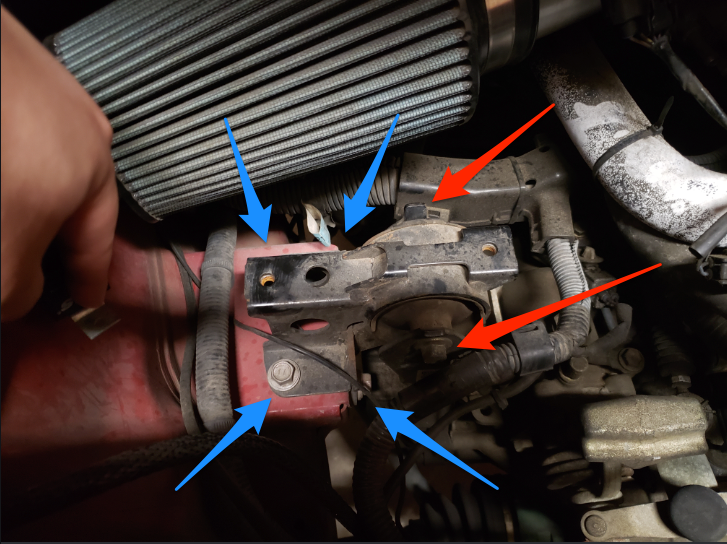 If the Transmission has had its pressure relieved from the jack underneath the Through bolt while come right out, then work on the remaining 4 bolts that hold the mount to the frame. The bottom two will be a PITA since they will be wrench exclusive unless you want to unbolt the mount off the transmission as well. Personally its not too difficult with just wrenches. Ratcheting wrenches help greatly here.

When replacing the new mount I would recommend hand screwing the Frame bolts in first, just a few turns. Enough to get them started but give yourself some slack to get the through bolt through. When tightening do a little of each at a time. If you are having issues lining everything back up you can re-adjust the jack from underneath. This should be the easiest one IMO. Be gentle and go slow, you dont want to strip any of the bolts from too much pressure.

Rear Engine Mount. - You actually do not need to jack the car up to do this however you might as well to prepare for the next 2. 14mm Frame bolts, 17mm Through bolt.

Same setup for the transmission mount. There is ample space to place the jack to relieve pressure, again you do not want to go crazy with it. Just enough to be able to pull the through bolt out. Same principle, get the frame bolts a few turns and enough slack to be able to re-assemble everything. I had a bit more difficulty lining this one up and did have to do a few variations of jacking and shifting to get everything to line up.

Passenger side Motor Mount - 14mm frame, 17mm long bolt. (FYI I have a 2zz swap, that metal "bridge" will not be there if you have the 1zz)

Relieving pressure - Extra care is needed in relieving pressure for this mount. The only spots to jack the engine up is on the oil pan. For steel oil pans its alright but again you must NOT over jack the engine. Slight movement is all you need. I have an aftermarket oil pan which is made out of aluminum so I was extra careful for that step. Its advised you place a cloth or piece of wood to help support the jack. The bigger the surface area the better, you dont want to put all that pressure on the point of your jack.

One bolt is located in the wheel well

Front motor mount - Re-use all the same tips for the transmission and rear motor mount.

For this one I was able to "nudge" aka aggressive tapping, the motor mount up to get it to slide into position

Thanks--was wondering how to do it for the Spyder. Any tips on when to change it. It's just rubber mounts, so is visual inspection the best way to check?

Thanks--was wondering how to do it for the Spyder. Any tips on when to change it. It's just rubber mounts, so is visual inspection the best way to check?

If they are cracked or torn that is not an indicator of the right time to replace just that you have gone way too far.  The rubber can look fine but they have deteriorated either with age or use that they have excessive flex that can cause damage to your downpipe flex section from excessive moment.

New mounts can make the Spyder drive better by giving you instant feedback on throttle and gear shifting. I would even say it can help with handling because there is less inertial of the engine being thrown around when you want to power out of a turn.

Not sure what compound the rubber is made of, old rubber tends to get hard, dry rot and crack.

I have seen mounts get an offset or lean from the torque.

Would be interested in what others have found on older cars with high mileage.

When I had my transaxle out for repair I inspected mine and thought they looked good and reinstalled.

Dev I will take your advice and watch them on start up.

For the record my car has 80k miles, but has been garage kept it’s entire life.

Not sure what compound the rubber is made of, old rubber tends to get hard, dry rot and crack.

I have seen mounts get an offset or lean from the torque.

Would be interested in what others have found on older cars with high mileage.

When I had my transaxle out for repair I inspected mine and thought they looked good and reinstalled.

Dev I will take your advice and watch them on start up.

For the record my car has 80k miles, but has been garage kept it’s entire life.

Being garaged kept makes rubber last much longer.  The rubber mounts for our cars or most cars are specifically engineered with the right amount of stiffness that is chosen for the application.  They are all different in both size and stiffness just like control arms.  Sometimes the manufacture gets it wrong and they will issue a service bulletin for replacement because owners complain about excessive vibration at stoplights.

Most modern mounts are rubber but they will have a fluid filled center to dampen fine vibrations and thats what we give up when we use aftermarket mounts.

Ether way most will not notice the deterioration of the mounts as time progresses until it becomes apparent from excessive moment, noise and vibration as the rubber gets stretched. Worst of all many particularly with the  Spyder will have a broken exhaust flex section and will replace the downpipe only to have it fail in 20k miles and then blame the downpipe.  If tired mounts are replaced early as a wearable part all of this can be avoided.

Thanks for providing such a great write up.  That last mount pictured has a tendency for the center bolt to work its way loose if you switch to urethane bushings.  So be sure to torque that one to spec and try to inspect it whenever you can.  I know this from experience.  haha.

What is the recommended motor mounts for the Spyder?  I know Speed Source has inserts for the front and rear.

I'm okay with cabin vibrations as this is my first track-dedicated build. I believe mine had poly inserts added (probably around the time of the Little Rocket 2zz swap years ago. They look in bad shape. The previous owner had the car covered outside while he was deployed in Iraq. Trying to bring it back to life. As Dev mentioned, it is probably the cause of the flex pipe break.

Innovative  sells complete mounts four our Spyders but they are expensive. The only advantage is they use to come in 65 shore rating which are softer for the street but I think they stopped making them because they were walking out of the mounts and now they only sell the 75 shore and above.

I think your best option is the speed source inserts which is actually a replacement not your typical urethane insert that goes into the rubber mount. They are 75 shore rated. The only downside is you have to cut out your old rubber mount including the casing before you push in these inserts. Its not too bad as long as you have a hacksaw.